ICE, enabled by Trump and Sessions, have kidnapped over 12,000 children for attempting to enter the country. Many are escaping countries ravaged by violence, only to be ripped from their parents’ arms and forced to live in tents and cages.

This attempt at ethnic cleansing must end. Whether by legislative bill, mass direct action or the dissolution of ICE, this racially motivated cruelty cannot be tolerated on our shores.

Join us for an evening building solidarity among those groups targeted by ICE’s pogrom, and planning the next steps forwarding in ridding America of its tyranny.  This rally will feature contributions and speakers from:

– Detroit Hispanic Development Corporation: Serving kids, adults and families in Southwest Detroit with education and career opportunities.
– Women’s March MI: Drawing some of the largest crowds in the state and country, this protest team is committed to creating a free and equal MI for the first time.
– ABISA: Helping Africans coming to America acclimate both socially and legally.
– Michigan United: Long-running local group with a robust body of work in the field of immigrant advocacy.
– Michigan for Revolution: A statewide network of activists pushing the Democratic party to embrace progressive action and policies.
– MDPAN: A direct action group in Southeast MI fighting for universal human rights and building solidarity among its proponents. 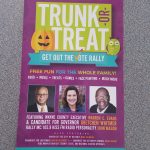