While results aren’t final across the country yet, and we need to make sure every vote is counted, a relatively clear picture of the results is beginning to emerge. Just like happened here in Michigan, as all the ballots are counted it is becoming increasingly clear that Joe Biden will be our next President. That explains why Donald Trump is trying to interfere with the counting of the remaining ballots.

Let’s be clear: A delay in final results is not an excuse to cast doubt on the results. It shows that our election system is working.

Thank you to everyone who voted, who volunteered, who worked the polls, and who was part of the many actions across the state yesterday to defend democracy. My wife and I attended the rally in Detroit, where we saw DFT 231 President Terrence Martin, UPTF 477 President Susan Titus and many other friends gathered together on a beautiful fall afternoon.

There will be Count Every Vote actions across the country this Saturday. Here in Michigan, there will be rallies Saturday afternoon in Traverse City, Lansing and Detroit. Check https://wemakemichigan.com/count-every-vote/ for information.

As you know, we carried Michigan for Joe Biden and Kamala Harris and re-elected Senator Gary Peters. The good news at the top of the ticket continued with the Michigan Supreme Court, where Bridget Mary McCormak and Elizabeth Welch were elected to give Democrats a 4-3 advantage.

The education boards appear to be more of a mixed bag, with five of our eight endorsed candidates winning:

It looks like there will be no shift in the partisan makeup of the state house and our Congressional delegation (in two of the most contested races, first-term incumbents Haley Stevens and Elissa Slotkin fended off well-funded challengers). We will provide a more detailed election breakdown once all the votes are counted and results are finalized.

Taking Care of Ourselves and Each Other in These Challenging Times

A lot of folks are working to ensure we #CountEveryVote. Parents are navigating schooling for their children in a pandemic. Educators are taking on the challenge of educating in a virtual world while managing their home life. These are tense times. We must take care of ourselves: Check out these low to no cost self care offerings of meditation sessions, yoga and more. 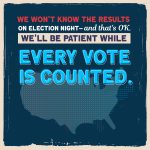 So When Will We Know Who Won the Election?AFT, Blog, Community, Solidarity Events, Uncategorized