On August 15, the Michigan Senate passed a package of legislation that will implement an agreement between Republican Legislative leaders and Governor Gretchen Whitmer to amend the State School Aid Act. The legislation seeks to provide public schools greater flexibility in how they offer learning programs in the upcoming school year in light of a global pandemic. The agreement makes sweeping changes from the initial legislation that was passed by the Michigan House in late July. House Bills 5311, 5312 and 5313 were amended by the Senate to eliminate many of the most controversial portions of the House-passed versions.

Specifically, the bills will allow flexibility for local school districts to make the final determination as to whether they will offer in-person or online learning for the entirety of the 2020-2021 school year. There will be no statutory requirement for in-person learning, and the Senate versions of the bills will provide for increased cooperation between school districts and local public health departments in order to make the best choice in each district to educate pupils safely. While there will be two benchmark tests required in the upcoming school year, they will not be used for purposes of funding, and district-by-district data will not be reported. Instead, all data will be aggregated in a report issued by the Michigan Department of Education on statewide outcomes.

Moreover, language that would have allowed districts to contract out teaching positions was removed, as were requirements that school staff be present onsite even when providing online learning. Despite the fact that the bills were greatly improved over the original versions, they passed the Senate largely on a party-line vote with most Democrats opposing them. Democrats offered amendments that, among other things, would have created even more flexibility on pupil counts, and removed benchmark assessments altogether. While those amendments would have improved the bills even further, the package is nonetheless an acceptable compromise in light of what could have been.

Here is a brief summary of the key components of the Senate-passed legislation:

All districts can offer in person or virtual learning as the local district and the local health department determine is safe or appropriate. (All schools can be all virtual for the full school year, or all in-person, or a blend). All schools must deliver the equivalent content that would be delivered in 180 days or 1098 hours in a non-pandemic year, but it is not based on physical presence of students. Districts are encouraged to prioritize in-person instruction for K-5 students.

The days and hours requirement will be waived for all districts for the 20-21 school year, HOWEVER, all districts must produce a board-adopted plan by October 1, and update it every 30 days, that includes the following:

Lastly, the bills contain no language regarding outsourcing, vouchers, or test-based funding.

AFT Michigan is appreciative of the efforts to negotiate a plan that provides the greatest possible flexibility to local school districts and emphasizes the safety of students and school employees. The circumstances facing public schools this year are like nothing we have seen in our lifetimes. This agreement demonstrates that leaders with differing viewpoints can still come together to craft a plan that – while imperfect – is a workable arrangement for school employees and students alike. 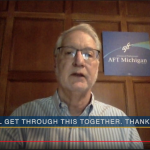 The Bottom Line: Education in the fall must be safe and educators must be involved in decisionsBlog, Community, Legislative Update 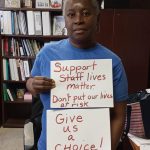