David Hecker’s column in the Oakland Press calls out Bill Schuette for trying to rewrite history:

But here’s the deal: Schuette doesn’t get to change the facts. For six years, he fought against teachers and support staff getting the wages they were rightfully owed. Schuette decided to drop from the case when the case was on death’s doorstep at the Michigan Supreme Court. Now he wants to claim he supports teachers getting their money back when he was the one fighting to keep it out of their pockets.

The years of appeals filed by Schuette and Snyder were a complete waste of time and taxpayer resources and were the latest in a long line of continued attacks on school employees.

If Schuette were playing a sport, his actions in this case would be like playing for a team that was losing the entire game, and then before the last play of the game, he went to the locker room and switched jerseys so he could be on the winning side.” 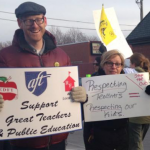