“Today, a judge made clear to Project Veritas that their unlawful tactics have a price. We understand that Judge Parker chose to show deference to free speech in lifting the injunction that has been in place for three months, but she made crystal clear that AFT’s claim about Project Veritas violating Michigan law when they infiltrated our confidential operations is likely to succeed.

“We believe strongly in the First Amendment, and while our swift action in seeking judicial relief was a heavy lift from a legal perspective, it established a strong foundation for our longer-term goal of protecting students, teachers and families in Michigan from the abusive actions of Project Veritas.

“Judge Parker’s decision supports our position that we have a right of action the moment Project Veritas publishes anything illegally obtained by their operative Melissa Jorge. Today’s decision gives clear warning that Project Veritas and people working on their behalf, in this case former Liberty University student Marisa Jorge, will be held liable for their actions. For too long James O’Keefe and his associates have advanced a political agenda from secret donors using secret infiltration and lies, heavily edited videos and spurious claims. O’Keefe has repeatedly declared his war on teachers, students and families organizing in the interest of high quality public education, and routinely advances false narratives based on heavily manipulated video. We will be zealous in seeking full relief and damages the moment O’Keefe goes public with any of the material stolen or illegally obtained by Project Veritas associates, and in challenging media narratives that promote false propaganda in the interest of secret political agendas.” 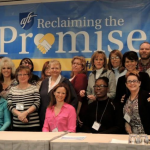